BOARD GAME FOR 25th ANNIVERSARY OF THE ORIGINAL DINO BLOCKBUSTER 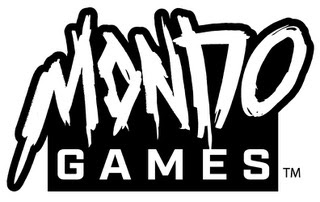 Austin, TX – July 12, 2018 – Celebrating 25 years of dinosaur chaos with the anniversary of Steven Spielberg’s unequaled Jurassic Park, Mondo Games is excited to unveil their next board game, “Jurassic Park: The Chaos Gene.” As with the highly successful board game for The Thing, movie fans and board game enthusiasts can expect exciting gameplay and gorgeous artwork, featuring the immensely talented artist Matthew Woodson. The game will be available online at MondoTees.com and in stores everywhere this Fall. The box top will be on display at Mondo’s booth at San Diego Comic-Con (#435), and attendees will have the opportunity to get a special Jurassic Park patch when visiting the booth.

If the great John Hammond taught us anything it would be to never stop asking, “what if?” What if we could clone an extinct species using preserved genetic material? What if there existed a source of fossilized dinosaur DNA buried deep below the earth’s surface? What if dinosaurs roamed the earth again? Here at Mondo Games, we asked ourselves these very same questions. Using state-of-the-art tabletop technology our leading game scientist, Luke Byers has created the ultimate gaming adventure.“In our approach to “Jurassic Park: The Chaos Gene”, we took many of our favorite elements of a traditional dungeon crawl style board game and spliced them with one of our favorite films of all time. The goal was to create something truly unique and incredibly fun to play” said Byers. 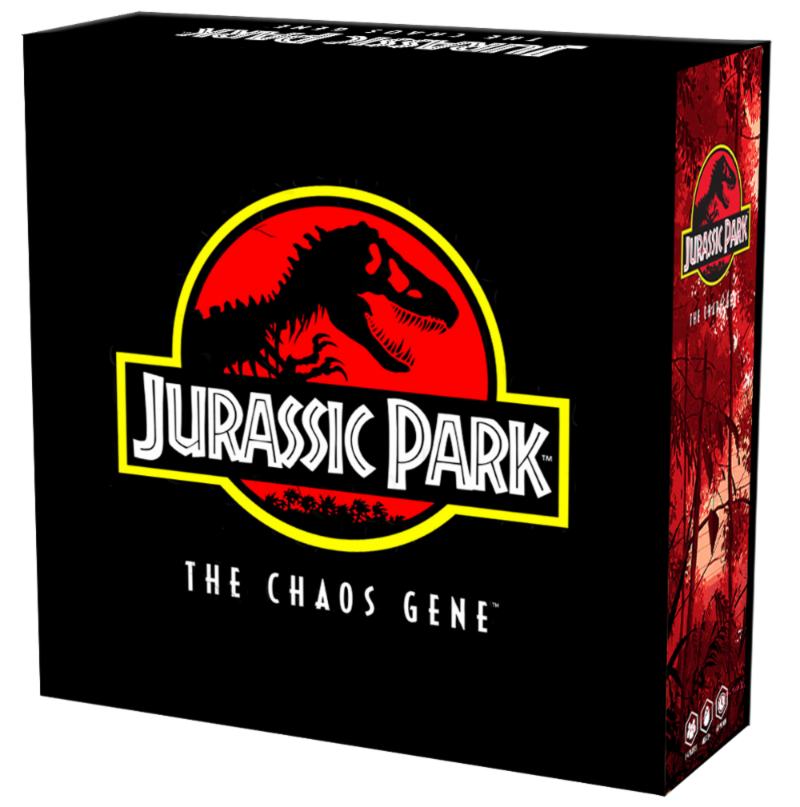 Taking an asymmetrical approach to the game’s playable characters and factions, “Jurassic Park: The Chaos Gene” is a 2-4 player adventure of varying strategies, objectives, and perspectives. Through a scenario-based system, the game becomes a truly chaotic mix of modern humans and prehistoric beasts.

While exploration of the park is at the core of each player’s motivation, the means by which separate factions achieve their goals couldn’t be more different. Whether working in the field of science as the head of InGen to maintain the stability of the park’s infrastructure or running terrified as invited guests of John Hammond, the humans use their abilities, specializations, and resources to reach their objectives.

The quick, lethal and stealth-like Raptor faction proves that humans are not the only animals that utilize their intellect and communication skills to solve the many movement challenges the park presents. The fast, gigantic and formidable Tyrannosaurus Rex poses a constant threat to all of the players. Driven by her base instincts, her objectives are the most straightforward… EAT!

“With some of the most beautiful art in gaming today by the immensely talented Matthew Woodson, we hope this game ‘…finds a way’ on tables of gamers and Jurassic Park fans alike for millions of years to come,” said Byers. 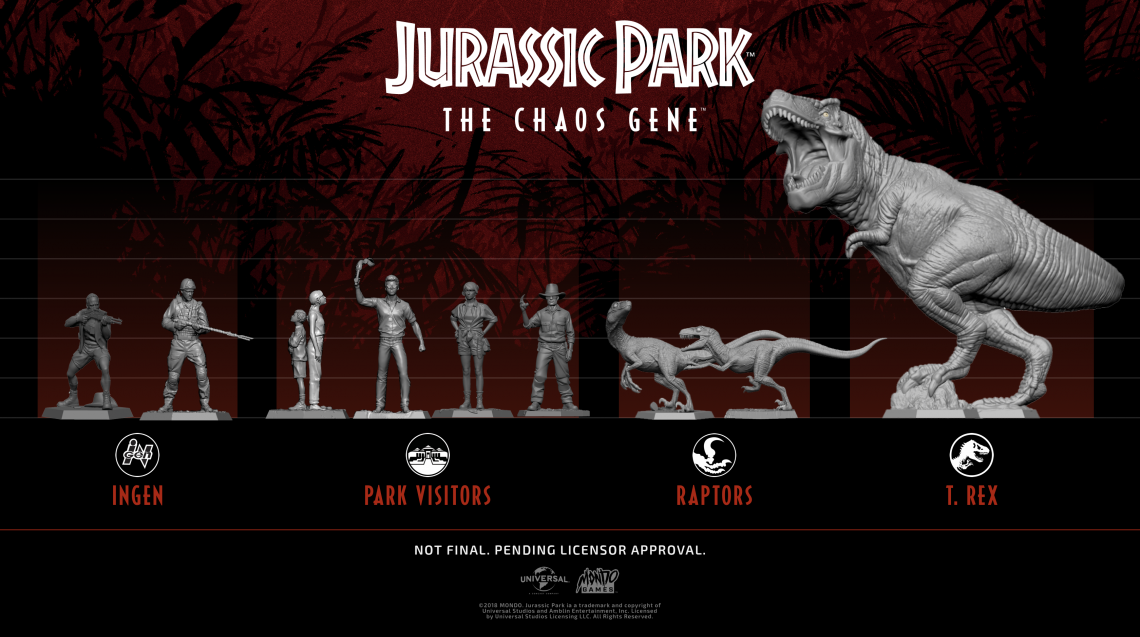 “Jurassic Park: The Chaos Gene” is a 2 to 4 player asymmetrical miniatures board game, for age 14 and up. Choose your faction from the following: InGen, Park Visitors, Raptors or the T. rex. Find items needed for your faction, attack or avoid other dinosaurs, gain experience and customize your faction. With several scenarios and modular environment tiles for players to explore, each faction has unique objectives to complete in an effort to win the game!

Quick, methodical, and unstoppable best describe the T. rex faction. One thing she is not, though, is quiet. The T. rex’s unrelenting drive makes her highly focused on satisfying her natural instincts… at all costs.

The T. rex can move twice as fast as the other factions and can affect the movement of the other players with her fearsome roar, all while completing her objectives. 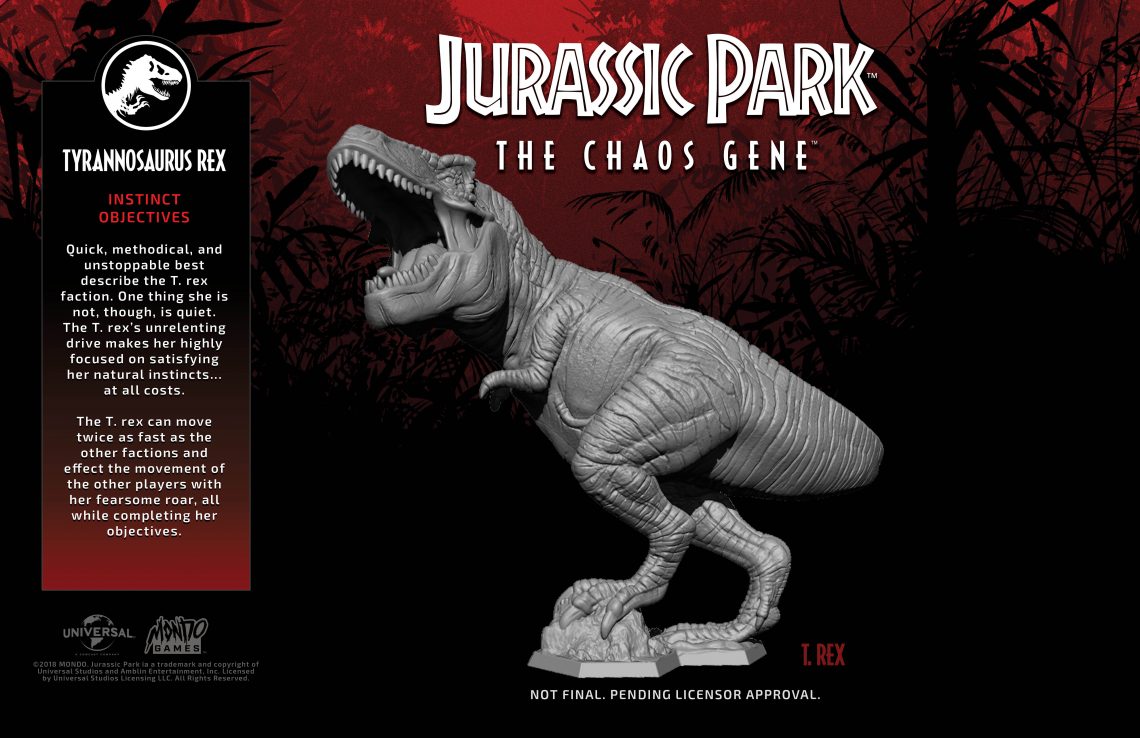 The Raptors are a cunning, resourceful, and flexible faction. Their stealth allows them to move quickly and quietly. Unique from all other park dinosaurs, their communication abilities enable them to work together in defending areas in their control, triangulate attacks on humans and park animals, and discover weaknesses in the park’s defenses. 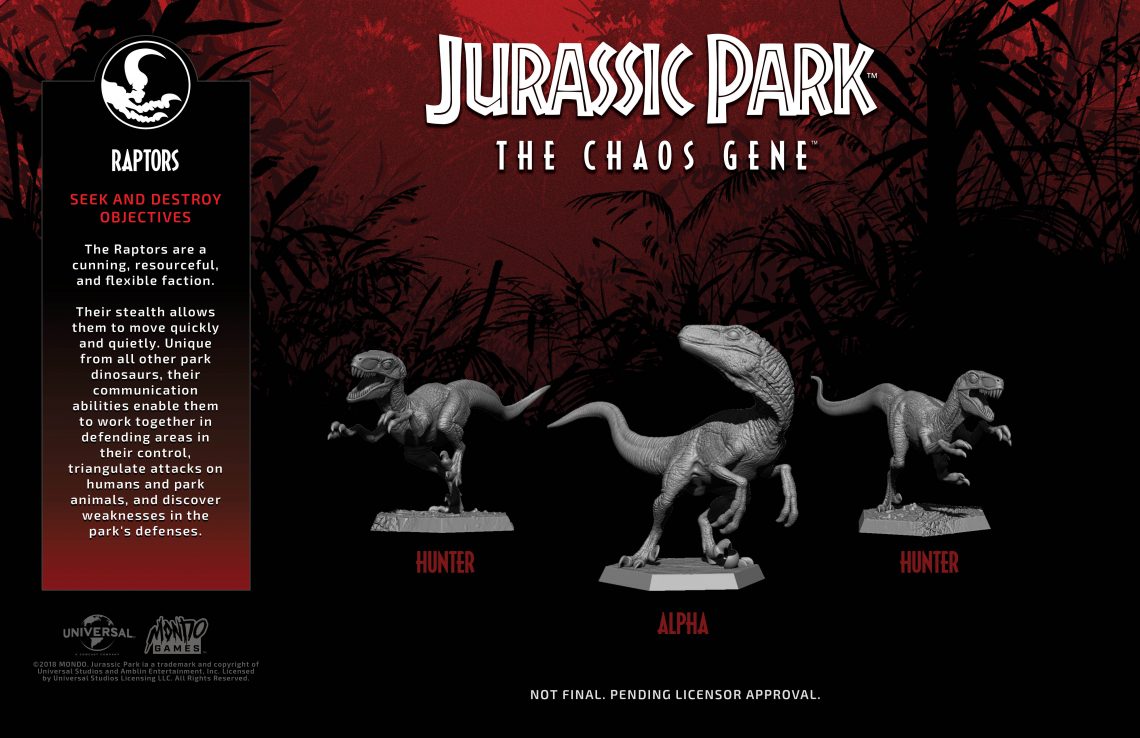 Park Visitors are both in awe of the park and terrified by its destructive nature. Visitors are able to extract the resources they find and use them to complete objective requirements or activate more powerful faction abilities. Highly skilled in their respective fields, each character brings a unique ability to the group as they make their way through the park and accomplish objectives. 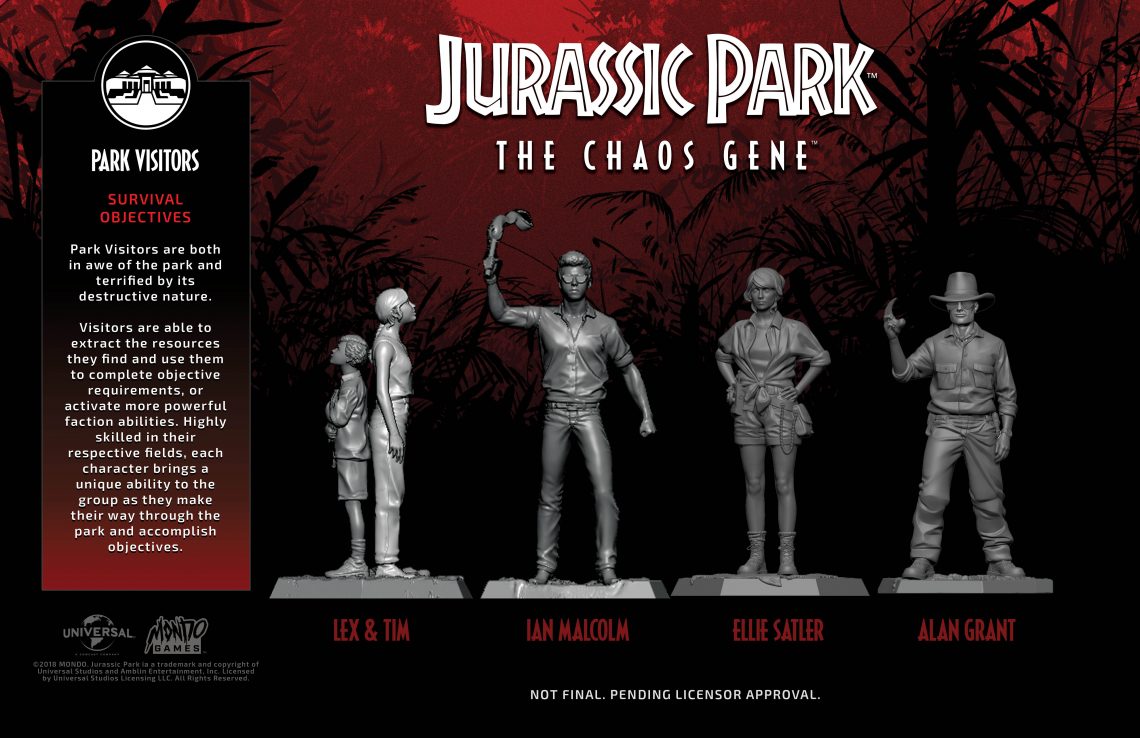 With systems crashing throughout the park, InGen is desperate to keep it functioning. Somewhat blind to the park’s status, their intimate knowledge of it makes them both helpful and dangerous to dinosaurs and humans alike. A successful InGen player must carefully manage resources and use their unique abilities to help shape the movements of other players. 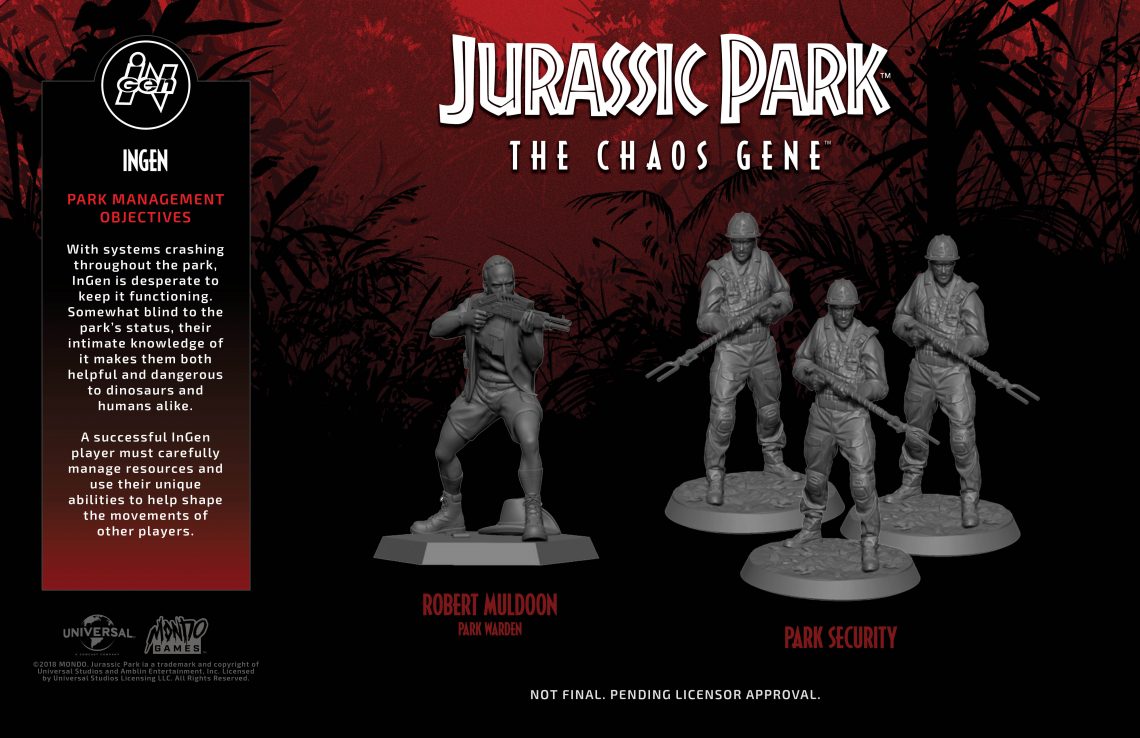 To sign up for updates on the game, visit the official site – TheChaosGene.com

Mondo is an expanding enterprise with a passionate love of film, art, music and pop culture, best known for creating limited-edition posters, vinyl soundtracks, premium collectibles a, d games. Based in Austin, Texas, the team collaborates with an international network of talented artists and creators to produce the highest quality products inspired by licensed properties and original IPs. Over the last decade, Mondo has partnered with leading entertainment brands including DC Comics, HBO, Marvel, Paramount Pictures, Sony, Universal Studios, Walt Disney Studios and Warner Brothers, along with dozens of independent studios and filmmakers from around the world. Find out more at mondotees.com.

SUNDANCE NOW AND SHUDDER ANNOUNCE THE PREMIERE OF THE HIGHLY-ANTICIPATED DRAMA SERIES “A DISCOVERY OF WITCHES” – THURSDAY, …