Released just this morning, Netflix has unveiled a brand new teaser trailer to the upcoming second season of their Marvel superhero series Iron Fist. Iron Fist is the story of  Danny Rand, who when he was 10-years old, survived a mysterious plane crash that claimed the lives of his extremely wealthy parents. Rescued by warrior monks, Danny grew up in the city of K’un-Lun, where he endured harsh conditions, but also trained to be a fierce warrior. Years later, Danny returned home to New York, where he wanted to reconnect with his past and take his rightful place at his family’s company, which is being run by his father’s former business partner. Danny hopes to restore his family legacy by defeating the people who threaten it.

In the new trailer, fans may recognize the yellow masks torn straight from the pages of the Iron Fist comics.  Danny (Finn Jones) and Davos (Sacha Dhawan) fight for the right to become K’un Lun’s champion. 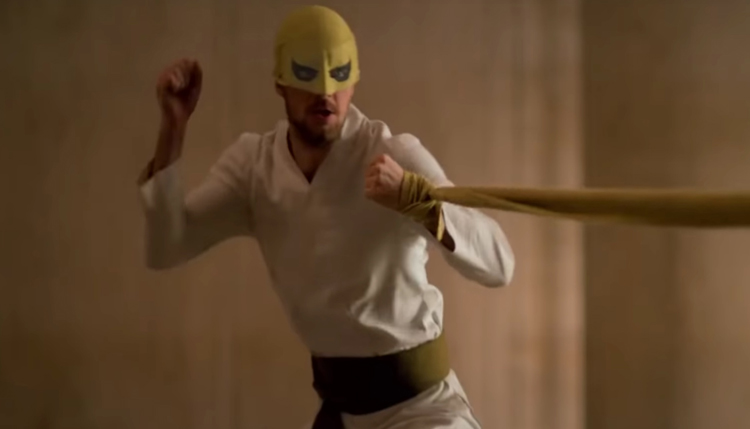 At Marvel-Netflix’s sole San Diego Comic-Con panel this year, Marvel TV head Jeph Loeb announced the street-level superhero’s second season return date and introduced fans inside Ballroom 20 to the series’ new showrunner, M. Raven Metzner (Sleepy Hollow), as well as a bevy of reveals about what’s to come. Notably, new cast member Alice Eve (Star Trek Into Darkness) joins as Typhoid Mary, an iconic Marvel supervillain who Eve explains is not only “very very violent, but the reason I took the role is because I got to play someone with multiple personalities.”

Fans were also treated to clips featuring Iron Fist’s yellow mask (or rather, two masks, as Danny bloodily fights Sacha Dhawan’s Davos in a flashback scene that drew the loudest cheers), Colleen Wing (Jessica Henwick) and Misty Knight (Simone Missick) — a.k.a. The Daughters of the Dragon — teaming up together again after partnering up briefly in The Defenders and Luke Cage season 2, and Davos in the present sporting a glowing fist (!) of his own. All six clips rolled during the panel highlighted the series’ action, and Loeb made sure to point out the new season’s emphasis on more dramatic fight scenes. Stunt coordinator and panelist Clayton Barber (Black Panther) said he wanted to guide some “punk rock” into the drama’s martial arts sequences. “He was meticulous in making sure that all of the fights you see this season are all of us,” Jones added, gesturing to the cast. “They’re all us.” – via EW

After Parker Posey‘s frankly perfect interpretation of the villainous Dr. Smith in Netflix’s Lost in Space, it raised …