“We’d like to thank the Georgia World Congress Center for being such an amazing venue. As well, we’d like to thank our core staff, hero staff, police, security, exhibitors/artists, guest creators, and celebrity guests, many of whom traveled great distances to attend. Our thanks culminate in thanking the attendees for attending because without you there would be nothing. So, THANK YOU for spending your weekend with us at Atlanta Comic Con. See you in 2019!”

The FREE Atlanta Comic Con app kept patrons up to date on the schedule of events and celebrity appearance times. The Celebrity autographs and photo-ops were cash only. Patrons were encouraged to bring their own items from home for them to sign, or use a selection of photos that were provided at the convention. 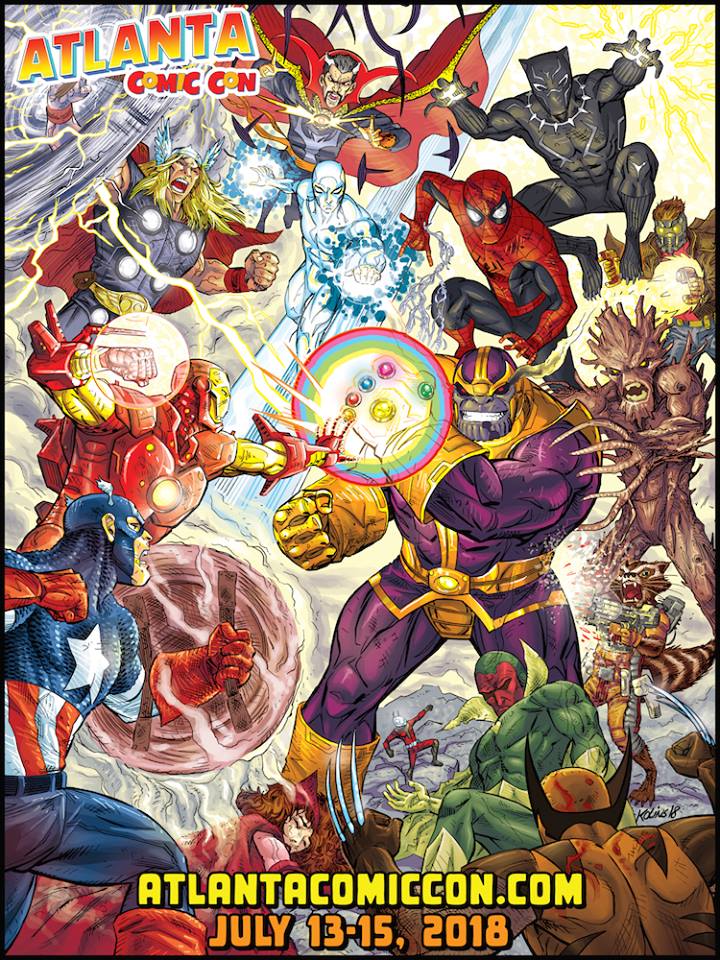 There was also a free Atlanta Comic Con 2018 official poster. An Infinity War inspired image features Thanos with the Infinity Gauntlet surrounded by Marvel heroes. Attendees had the opportunity to get the poster autographed by the artist who illustrated it, Scott Kaolins who was a guest artist.

There were two sides to the convention: the exhibit hall and the programming rooms. The exhibit hall was where the celebrity guests and creator guests were located. There were exhibitors selling everything from LEGO mini figures, comic books, magazines, cards,  to toys, games, apparel and medieval weaponry. Additionally, in the exhibit hall, there was an arcade setup and an Optimus Prime replica on display.

The programming rooms were where all of the panels, contests, and content were presented. Nine rooms featured content until midnight on Friday and Saturday (and until 5 pm on Sunday). Throughout the weekend the various rooms featured celebrity panels, guest creator panels, cosplay contest, Rocky Horror Picture Show, tabletop gaming, a film festival, improv, Freestyle D&D, and numerous panels covering a wide spectrum of subject matter.

Atlanta Comic Con announced they will be returning in 2019! Are you planning on attending next year? Follow us on Twitter @wearesecondu and let us know!

Lucasfilm released a brand new TV spot for Solo: A Star Wars Story over the weekend. Are we …