Another San Diego Comic-Con is in the books and it was another amazing adventure for the Second Union team. Approximately 150,000 people traveled to San Diego to be amongst the first to see exclusive content and new trailers for anticipated blockbusters. From Preview Night to Sunday Night, there was never a dull moment. Inside and outside of the Con, there was fun to be had. Listed below is only a smidgen of the SDCC 2018 happenings. So, take a look at galleries of the fun that was going on during San Diego Comic-Con 2018.

Wednesday showcased San Diego Comic-Con’s Preview Night. But before Preview Night, we checked out a ComiXology Luncheon and the Ready Player One activation.

ComiXology unveiled the next wave of comiXology Originals creator-owned titles at a press event hosted by comiXology’s CEO, David Steinberger and Head of Content, Chip Mosher. The event featured the creative teams, sneak peeks of upcoming titles, and more!

Warner Bros. Home Entertainment invited us to enter the virtual world of Ready Player One at Comic-Con 2018. We experienced the nostalgia of the 80s in the interactive walkthrough activation full of nostalgic gaming stations, and authentic film props and costumes. We tested our knowledge of the film and 1980s trivia in two challenge rooms and explored the depths of The OASIS, including the haunted room 237 from The Shining.

Thursday San Diego Comic-Con was filled with lots of activations. We got to attend the activations of Fire TV: Fast Forward to the Future, the Mr. Mercedes Immersive Experience, and the Jack Ryan Experience.

Fire TV welcomed us to the future of television. We stepped inside and strolled through a reimagined world, where all our favorite shows and devices lived in one friendly neighborhood.

We got lost in our streams with Fire TV’s latest devices and experienced true content control as we switched to live instantly and went hands-free with Alea.

The experience gave fans a glimpse into the past and a peek into the future of the AT&T AUDIENCE Network original series based on the trilogy by Stephen King. Fans were the first to play the virtual reality (VR) escape room game, “Mr. Mercedes: Lair Escape,” on the HTC Vive Pro – the next generation of VR headsets. In the “Mr. Mercedes: Finders Keepers” augmented reality (AR) adventure game, they collected clues to unlock never-before-seen content and special prizes.

Tom Clancy’s Jack Ryan, a new series releasing worldwide August 31 exclusively on Prime Video. Transporting visitors into the heart of the Middle East in a 60,000 square foot activation, Tom Clancy’s Jack Ryan Experience featured: The Jack Ryan Training Field, a thrilling blend of virtual reality and the physical world featured  zip lines and car chases; Dark Ops, an escape experience that recreates the show’s pilot episode; and the Bazaar, filled with missions to be completed at every turn.

We were invited to join the Scholastic Team for the Graphix Scholastic Event at San Diego Comic-Con with Ian Boothby, Gale Galligan, Jarrett J. Krosoczka, Molly Knox Ostertag, Aron Nels Steinke, and Raina Telgemeier. And we had time to squeeze in the Power Rangers: Legacy Wars industry party that was hosted at the swanky Luce Loft in San Diego.

Friday San Diego Comic-Con gave us the chance to get a behind the scenes look at the DC Universe Fan Activation. and The Experience which took place all day at the Lexus Premier Lot and is open to Comic-Con badge holders (who enjoyed VIP status) and the general public.

The DC Universe Fan Activation was a larger-than-life installation of epic proportions which welcomed fans into interactive spaces that brought iconic characters and stories to life.

Guests of the activation interacted with dozens of activities and installations including:

DC UNIVERSE is a first-of-its-kind digital subscription service that gives fans access to exclusive content and experiences not available anywhere else. With membership, fans will enjoy all-new original live-action and animated series, classic TV series and films, a curated selection of digital comic books, breaking news, an expansive DC-centric encyclopedia, and access to exclusive merchandise. Additional fan features include opportunities to connect with others in the DC community, earn premium rewards and participate in sweepstakes and contests. Sign up today at dcuniverse.com

The Experience was a three-acre blacktop will transform into a pop-culture playground equipped with food trucks, VIP lounges, evening entertainment and a myriad of activations from some of the largest Comic-Con-esque brands.

Saturday San Diego Comic-Con was Hall H day at the convention center. Warner Bros. went big by offering a close-up look with exclusive footage only for Hall H eyes at Wonder Woman 1984, Shazam and Aquaman. WB’s other big non-DC properties in the panel block were The Lego Movie 2: The Second Part, Fantastic Beasts: The Crimes of Grindelwald, and Godzilla: King of Monsters.

Sunday San Diego Comic-Con is the day to peruse the Exhibitors floor and Artist Alley one last time.

Overall, this year’s Con was a ton of fun! Mark your calendars…Next year’s dates have been announced for July 18-21, Preview Night July 17. If you are attending SDCC for the first time next year, the first thing to do is to create a Member ID. A Member ID is needed in order to be eligible for Open Registration and will get you on the official CCI email list for updates. Keep checking our site as we countdown to San Diego Comic-Con 2019, celebrating their 50th show and help you to prepare. 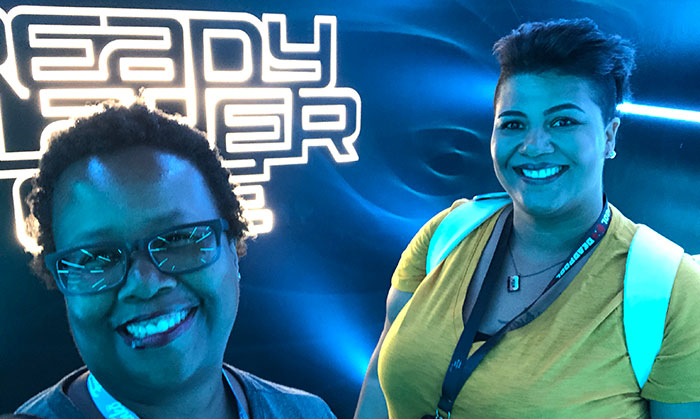