NYCC fans were among the first to watch the new series as Robin and the Titans took over New York Comic Con for this world premiere event at the Hammerstein Ballroom. After the screening of not only episode 1 but also episode 2, series stars Brenton Thwaites (Pirates of the Caribbean: Dead Men Tell No Tales), Teagan Croft (The Osiris Child), Anna Diop (24: Legacy), Ryan Potter (Big Hero 6: The Series), Minka Kelly (Friday Night Lights), Alan Ritchson (Blood Drive) joined executive producers for an onstage Q&A.

The official first day of New York Comic Con! The moment one tapped their badge and walked through the security gates, the sign of good times for the next 4 days were everywhere. The exhibitors of NYCC 2018 have upped the game of entertainment activations as a marketing ploy. There were tons of activations for attendees to experience.

To tease season two of “American Gods,” Starz brought one of the show’s central locations, the Motel America Diner, to New York Comic Con. The diner captured the attention of American Gods fans old and new by recreating everything from the iconic Motel America sign to the branded placemats that line the tables.

Featuring numerous photos ops and Easter eggs, the Motel America Diner was ripe for social chatter in anticipation of season 2, plus offered an endless array of unique shareable moments.

Just like any good roadside diner, the Motel America Diner will offer show-themed swag. To earn swag, fans will have to make a sacrifice to the Gods and Tweet/FB/Instagram with the tags @AmericanGodsSTZ #AmericanGods to receive one of our Motel America souvenirs – an iconic Motel America t-shirt and a character button.

The booth welcome New York Comic Con attendees to Fraser’s Ridge. Working with artisans and brands from the era, the Starz “Outlander” cabin experience featured two apprentice-style workbenches where fans customized a leather item as well as received a natural healing elixir inspired by the show. Brand experts were on-site to talk about the process and authenticity that went into bringing to life the historic details from colonial America.

STARZ partnered with historic fragrance and beauty brand, Caswell-Massey (est. 1752), to curate a collection of the historically accurate products to offer fans as a unique, show-inspired takeaway. Fans were able to take home one specially co-branded bottle of their choosing. STARZ also partnered with family-owned leather goods brand, Royce, to offer guests a luggage tag – a necessity for time travel – that was customized with their monogram on-site.

NYCC attendees got their chance to meet the Meat Servant at Shudder’s booth. The memorable creature from Channel Zero’s third installment, Butcher’s Block, was on display for courageous fans to encounter. While there, attendees stocked up on Shudder swag, including limited edition Shudder enamel pins available to those who sign up for the service at the booth, while supplies lasted.

We’re ready for you, @NY_Comic_Con.

“Skyscraper: The Impossible Leap VR Experience”
combines the magic of virtual reality technology and the blockbuster spectacle of Universal Pictures’
Skyscraper to let participants enter the show-stopper crane jump from this summer’s pulse-pounding thriller. Step into the shoes of Dwayne Johnson’s Will Sawyer and leap to The Pearl across the Hong Kong skyline on the mission to save your family from a group of armed kidnappers, all from the safety of the New York Comic Con floor.

Skyscraper is available now on Digital and coming to 4K Ultra HD, Blu-ray 3D, Blu-ray and DVD on October 9.

Constantine: City of Demons – The Movie

Upon entering “The End is Nigh,” guests will be carried into an undisclosed location via a peculiar elevator, detailing their fate between good and evil. Some visitors will be fortunate enough to be let into “Heaven,” while other ill-fated guests will make their way into “Hell.” Either way, fans will be delighted to step into a fully built out world based on the “Good Omens” series.

The End of the World is coming, which means fussy Angel and a loose-living Demon who’ve become overly fond of life on Earth are forced to form an unlikely alliance to stop Armageddon. But they have lost the Antichrist, an 11-year-old boy unaware he’s meant to bring upon the end of days, forcing them to embark on an adventure to find him and save the world before it’s too late.

Friday, October 5th Amazon Prime Video released an exclusive behind the scenes video of the highly-anticipated second season of Lore during the show’s panel at New York Comic Con.

Lore explores the real-life frightening and disturbing tales that have given rise to our modern-day myths and legends. The six-episode second season will feature new tales from the podcast, as well as original stories not yet available in podcast form. The anthology series will continue to interweave rich archival and mixed media sequences to complement the narrative segments.

At the panel, fans got to join AMERICAN GODS cast members and Executive Producer Neil Gaiman for an exclusive first look as the battle continues between New Gods and Old in Season Two of the hit STARZ Original Series at their first ever official New York Comic Con panel.

AMERICAN GODS is a one-hour drama adapted from Neil Gaiman’s novel of the same name.

Following the epic showdown at Easter’s party, Season Two ups the ante with Mr. Wednesday continuing his quest to pitch the case for war to the Old Gods with Shadow, Laura and Mad Sweeney in tow. But when things don’t go as planned at the House on the Rock, they all find themselves on a haunting journey through middle America. Season Two will premiere in 2019 on STARZ.

Nickelodeon’s Rise of the Teenage Mutant Ninja Turtles voice cast and co-executive producers gave fans at New York Comic Con a look at what’s in store for the Turtles and April O’Neil during a panel at the Jacob Javits Convention Center. Moderated by Mike Cecchini (Den of Geek), the panel featured voice actors Omar Miller as Raph, Josh Brener as Donnie, Brandon Mychal Smith as Mikey, and Kat Graham as April O’Neil, along with the co-executive producers Andy Suriano and Ant Ward, and legendary voice director Rob Paulsen.  Special guest Maurice LaMarche (Pinky and the Brain) made an appearance to discuss his role as the Foot Brute.

DreamWorks Tales of Arcadia: 3Below, a Netflix Original Series Panel

During the panel, there was a special first look of DreamWorks Tales of Arcadia: 3Below the second chapter in the DreamWorks Tales of Arcadia trilogy which took place at New York Comic-Con inside Madison Square Garden in front of a packed audience. Creator and executive producer Guillermo del Toro (The Shape of Water) was joined by voice talent Diego Luna (Narcos: Mexico), and fellow executive producers Rodrigo Blaas, Marc Guggenheim and Chad Hammes. The panel, along with moderator Whitney Matheson, unveiled the all-star voice cast including Glenn Close (The Wife) who made a surprise appearance!

Spider-Man: Into The Spider-Verse Panel

At the Hulu Theater at Madison Square Garden were cast and filmmakers from Sony Pictures Entertainment’s highly anticipated Spider-Man: Into the Spider-Verse, from the creative minds of Phil Lord and Christopher Miller. The audience got panel inside look at the limitless possibilities of the Spider-Verse –  where more than one can wear the mask. The film is presented in association with Marvel.

Star Trek, one of the most iconic and influential global television franchises, has left an indelible mark on our world.  What began as a TV show over 50 years ago became a window into the future and a reflection of our greatest hopes for a better tomorrow. Panel attendees joined the cast and producers of STAR TREK: DISCOVERY as they discuss the legacy of the franchise, and what adventures await the CBS ALL ACCESS Original Series as it warps into Season 2.

At New York Comic Con 2018, Starz surprised “Outlander” fans with an unannounced, first look screening of the premiere episode of “Outlander” Season Four, which was introduced by surprise guest Diana Gabaldon, author of the Outlander book series. Gabaldon’s panel attendance was not previously announced, which created an epic surprise for fans who also got to see her on the panel with cast and creators following the premiere screening.

At he Hulu Theater at Madison Square Garden, attendees were entertained by cast and executive producers from AMC’s “The Walking Dead”. They discussed the show’s exciting new chapter and some hints of what’s to come. The audience was surprised with an advance screening of the Season 9 premiere episode before its official debut on October 7th at 9 PM ET/PT. 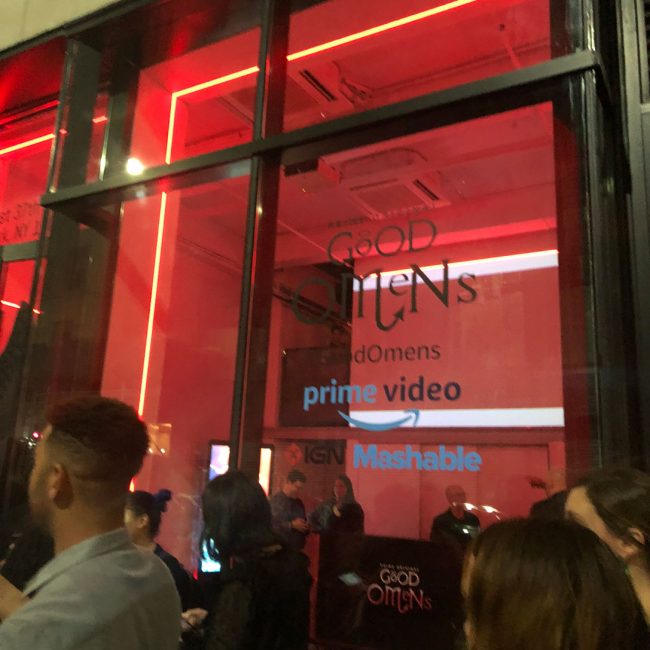 Welcome back to a place where being normal is strange and only outsiders fit in. Based on the best-selling book series by Charlaine Harris (author of the novels that inspired “True Blood”), comes a journey into a remote Texas town where nothing is what it seems. Home to a psychic, vampire, witch, angel and hitwoman, Midnight is a mysterious safe haven for those who are different – a perfect place for anyone looking to hide from the outside world. After defeating the demon Colconnar the residents of Midnight try to go back to life as it was, but the balance they thought they were regaining becomes threatened with the opening of a mysterious new hotel in town

New York Comic Con 2018 was a ton of fun! Mark your calendars…Next year’s dates have been announced for October 3-October 6.

Some of your favorite DC Comics characters have been sealed in 70’s style packaging!  A classic Hanna Barbera …

In an announcement released today, Warner Bros. Animation has officially green-lit a season 3 for the animated series, …