Snow is falling, the scent of pine needles is in the air, so it must be… Time to watch some awesome movies and TV shows on COMET TV and CHARGE!

Yep, this December the sci-fi and horror classic The Terminator is blasting its way through Comet TV! Check out the classic and the birth of Cyberdyne Systems!

If that wasn’t enough to celebrate the holiday season Babylon 5 has a Christmas marathon! After you sip your eggnog and trim the tree, turn on COMET TV for a spacey Christmas Marathon! Starting at 10a/9 C!

And don’t forget to check out Area 10! The best in cult classic films are airing all month long on Comet TV!

We have an awesome giveaway opportunity with exclusive swag for one awesome COMET TV viewer!

Tweet @WatchComet and let them know about your latest sighting, abduction or let them know what you’d like to see on COMET.  #CometTV 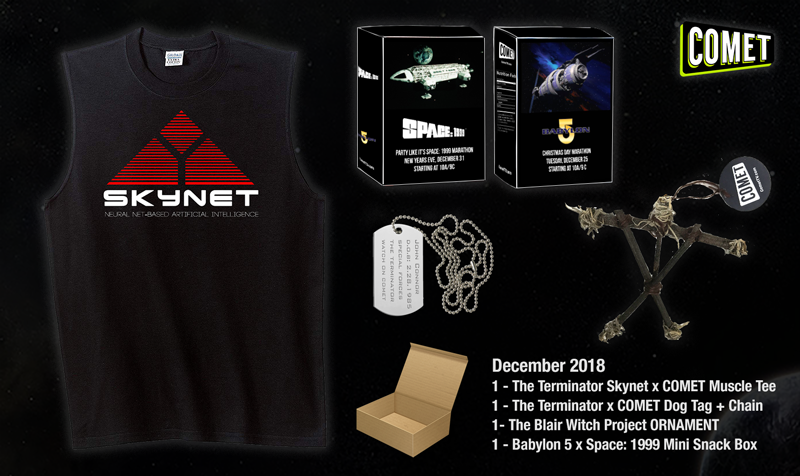 The Comet TV and CHARGE! December Prize Pack has:

1 – Limited Edition Terminator Muscle Shirt – Show off those guns! Figuratively and literally in this awesome Terminator Tee! Do some flexing and share your pics on the gram! #CometTV

1 – Exclusive Blair Witch Holiday Ornament – Deck the halls and ring in the new year with the Blair Witch! This hand-crafted ornament will bring holiday scares to you and those you love!

1 – Terminator Dog Tag – John Connor is the leader of the resistance and this promo dog tag set will get you ready to battle the cyborgs of the future!

1 – Babylon 5 and Space:1999 Custom Snack Box – This is the perfect treat to celebrate any trip to space. It might require some popping, but this custom box will satisfy any spacey craving!

Airing on COMET in December

YOU DON’T NEED A SUBSCRIPTION TO WATCH THESE GREAT MOVIES…THEY’RE AIRING FOR FREE ON COMET!

The Blair Witch Project (1999)
There’s something sinister lurking in Black Hills Forest and missing girl’s disappearance is linked to the legend of The Blair Witch! A group heads into the woods to find out what happened and the footage found after will send a chill down your spine. Don’t turn your back because you don’t know what’s lurking behind you….
Saturday, December 15 at 5/4 C
Thursday, December 20 at MIDNIGHT/11C
Monday, December 24 at 2a/1C
Saturday, December 29 at 12:30a/11:30C

Area 10
The best in cult classic films are airing all month long on Comet TV! If you ’re in the mood for laughs check out Haunted Honeymoon, if you fancy a trip book your ticket to Futureworld, join Ah-Nuld for The Terminator and who doesn’t have those Jeepers Creepers!

The Adventures of Buckaroo Banzai (1984)
It’s a battle to the death! Buckaroo Banzai gets caught in the middle of two alien forces from Planet 10. But Buckaroo Banzai has the Overthruster which will bring the bad aliens back to their home planet, which the good aliens can’t allow to happen. Earth’s survival hangs in the balance!
Wednesday, December 12 at 3/2 C
Thursday, December 20 at 5/4 C

Airing on CHARGE! in December

Hurtin’ For A Burtin’
From Dusk Till Dawn TRILOGY

Each household is only eligible to win Comet and Charge! Prize Pack via blog reviews and giveaways. Only one entrant per mailing address per giveaway. If you have won the same prize on another blog, you will not be eligible to win it again. The winner is subject to eligibility verification.

Giveaway winners must be in the U.S.

Back in January, Facebook founder and CEO Mark Zuckerberg told us he had a dream. A dream to develop an …

“We could always throw tribbles at them.” I have a little bit of a story to tell. It …