With only two years of announced shows and films, Phase 4 of the MCU is the shortest phase so far and includes the fewest returning franchises since Phase 1. It also doesn’t build up to a major Avengers event movie (that we know of).

Does this make it the least exciting phase so far? Will Marvel struggle to excite fans after the massive Infinity Saga and the retirement of many fan-favorite heroes?

We’ll talk about the quality and excitement level of the projects chosen but first let’s look at the overall scope of this phase:

So far, there are 11 projects confirmed to come out 2020–2021. There are another 3 Disney+ shows announced but not given release dates. They also announced the release date for Black Panther 2 as May 6, 2022 but didn’t specify if this would be Phase 4 or 5. 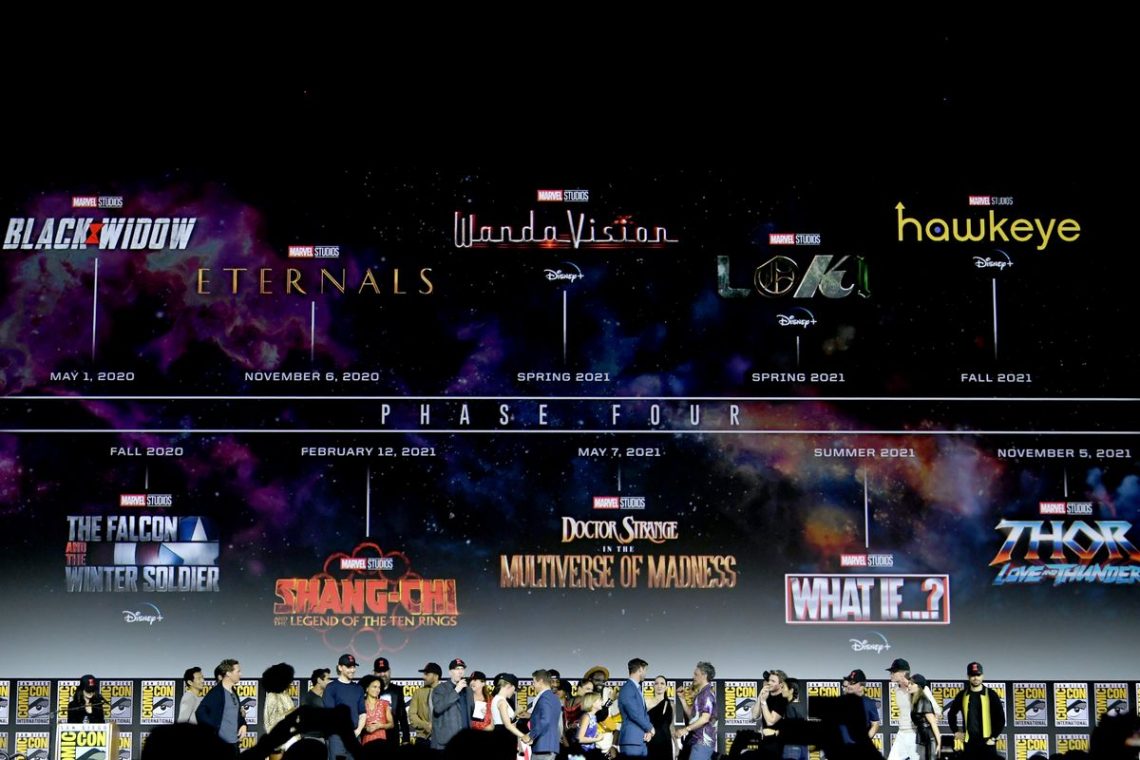 I wouldn’t be surprised if Phase 4 ended up including projects released in 2022 and maybe even 2023. However, even if it only includes the 11 confirmed projects, we’re still looking at a pretty exciting phase.

After Avengers: Endgame, everybody obviously wants to know where their favorite heroes are going next. Sequels for Black Panther, Captain Marvel, Guardians of the Galaxy and Ant-Man and the Wasp are all top of mind.

Instead, Marvel is using this phase to launch more original content than ever before and help set up the next decade of the MCU. According to Kevin Feige:

“We had a movie this year called Avengers Endgame and it is very much an ending as you saw to so many of those characters. So phase 4 is about beginnings.”

Phase 4 will include 9 new properties (not direct sequels) out of the eleven projects coming. That will be the most new properties since Phase 1! Again, to put it into perspective, Phase 1 had 5/6 original properties, Phase 2 had 2/6, and Phase 3 had 4/11.

This phase is all about showing us stuff we’ve never seen before.

The other major change in this phase is the introduction of the Disney+ shows. Five of the eleven properties announced are “event series” on Disney+. This means we’ll get 6–10 episodes that are directly tied into the movie universe in a way Marvel Television was never really given the opportunity to be. Naturally, every one of these projects is brand new and gives us an opportunity to explore characters that haven’t had the chance to star in their own franchise.

Falcon and the Winter Soldier, WandaVision, Loki, What If…, and Hawkeye will all be great shows on their own. The fact that WandaVision is confirmed to lead directly into Doctor Strange and the Multiverse of Madness – with Elizabeth Olson joining the cast – is something we’ve never experienced before. This level of crossover opens up all kinds of possibilities.

The more recently announced shows (not confirmed for Phase 4) Ms. Marvel, Moon Knight, and She-Hulk will also introduce brand new characters to the MCU. It has even been confirmed that Ms. Marvel will be introduced in her own Disney+ show before making the jump to the MCU movies.

No Build Up to Avengers?

One thing that may lead people to feel this phase is lackluster is there hasn’t been an announcement of the next big team-up film. With only 11 projects confirmed for this phase, it is still possible that an Avengers film will end up in Phase 4, but I don’t think that is Marvel’s plan.

After Avengers: Endgame, Marvel understands the need to re-establish the status quo before blowing it all up again with a major event. For that reason, Phase 4 may seem like more of a low-key phase but they are definitely still building towards a major, overarching storyline.

When asked about the next Avengers movie, Kevin Feige said:

In order to set up that drastically different team, Marvel needs to spend the time to carefully introduce the new members and move the returning characters to a place that will make sense. Luckily, that is what Phase 4 is all about.

Tim Ludy is an active podcaster, cosplayer and D&D player from Massachusetts. He is the host of The Entreprenerd Podcast which interviews the podcasters, cosplayers, bloggers and creators behind the community’s best geek brands.

Ever since the Constantine NBC series was canceled in 2015, fans have been clamoring for the return of …

We’re extremely lucky to have Steven Spielberg in the film industry. When the first trailer for his adaptation …