7 Things the ANIMORPHS MOVIE Needs to Include

Every (cool) ’90s kid is finally getting their dream come true – Animorphs is being turned into a movie. There have been rumors for years that the book series by K.A. Applegate and Michael Grant would get an adaptation and it sounds like the project has finally found a home.

Scholastic Books is partnering with Picturestart to produce the film based on the sci-fi book series which included 60 books from 1996-2001. With over 35 million copies of Animorphs in print, the series could still represent a massive audience.

For those unfamiliar, Animorphs follows five teenagers who are given the power to turn into any animal they touch in order to stop a secret alien invasion. The parasitic alien Yeerks have the ability to take over human bodies, forcing the Animorphs to fight a guerilla war against them for years.

The question is, what’s the best way to translate this to the big screen?

Animorphs already received a TV adaptation that ran for two seasons on Nickelodeon in the late 90s. Apart from a pretty fire theme song, the show didn’t fully capture the essence of the book series. Grown-up kids who remember the show might be expecting more of that classic 90s cheese with maybe a better budget.

If Scholastic and Picturestart want a more faithful and ultimately successful adaptation, here are the things the Animorphs movie absolutely must include: 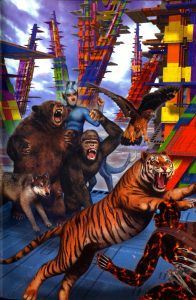 The biggest and most understandable issue with the television series was its low budget. This meant that the show included very little actual morphing and virtually zero action. The most we got was a lion or tiger roaring at some human bad guys, who would run away, or a very rigid alien puppet roaring at the Animorphs, who would run away.

The one absolute requirement for this movie is that it must include a tiger, grizzly bear, gorilla, wolf, and red-tailed hawk (the team’s battle morphs) all fighting a large force of seven-foot-tall bladed aliens called Hork-Bajir. The main bad guy, Visser Three, must then turn into some gigantic alien death machine for the final battle.

The great thing about this series is they are fighting a secret, guerilla war. There aren’t any city-destroying conflicts to deal with (at least for the first movie…Woah..spoilers). Most of the action is contained to a single building or an underground base and Jake’s shout of “Battle Morphs!” is usually a last resort when they are cornered. However, they absolutely need the budget to get that action right and to do the various aliens justice.

At its heart, the Animorphs series is a war story. The books deal with PTSD, genocide, slavery, and the morality of killing. (I read these books when I was eight years old…)

While the series was definitely targeted towards kids, it dealt with some very mature issues and these issues are at the heart of the series. Removing them was one of the main reasons the TV show feels a little lacking. Including these issues will also be a great way to set Animorphs apart from a lot of other standard action/adventure movies.

In the books, nothing is black and white and war is hell. Several of the kid’s family members are Controllers, humans secretly being controlled by the alien Yeerks. The Animorphs make rules about how they’ll conduct themselves in this war – things like never killing human-controllers and never morphing humans – and eventually end up breaking all these rules.

While they’re initially okay with killing Yeerks and the other aliens they control, they eventually run into Yeerk Peace Movements and help create a colony of free Hork-Bajir, further complicating their conceptions of the war. Their supposed alien allies, the Andalites, commit several war crimes as they’ve become so jaded and desperate by decades of war.

Personally, I’d love an adaptation that isn’t afraid to cover these difficult topics. While the studios may want to market this towards a younger audience, the books proved that you can write to a young audience and still create very mature stories. 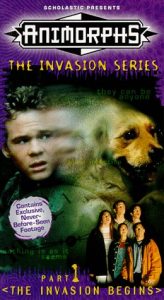 Did you know a peregrine falcon in a dive is the fastest animal on the planet? Did you know an owl’s feathers are designed to be completely silent as it flies? I can’t think of any non-bird facts at the moment, but they’re in there.

When the kids morph into animals, they gain the instincts of the creature. Seeing through the animal’s mind and learning about different animals from this perspective turned a lot of young readers into animal lovers.

This is especially true when the Animorphs turn into a dog or a dolphin or a red-tailed hawk. The movie should try to capture the joys of flying through the air or the feeling of raw power that comes with being an elephant.

In only the second book of the series, the Animorphs morph into ants to infiltrate a Yeerk’s home. They immediately lose themselves to the single-track mind of the ant that only knows obedience to the queen and lacks all autonomy. Then, they end up in a different ant colony and the army ants proceed to tear them to shreds before they are able to de-morph and heal themselves.

This becomes an on-going nightmare for the team throughout the series, but it isn’t the only one. They often have horrible experiences morphing, either losing control of the brain of the animal or simply have some horrible experience while in morph. The morphing process itself is grotesque and nightmarish.

This theme again proved too dark for the television series. However, I think it’s important to include as it is another aspect that these children must endure as they fight this secret war. The movie shouldn’t go too deeply into the horror aspect as that could make the overall tone of the movie very uneven, but it should make it clear that morphing isn’t always a great time.

Unique Experiences of the Main Characters 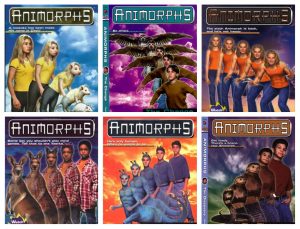 Each book in the series is told from the perspective of one of the six main characters, Jake, Rachel, Cassie, Marco, Tobias, and Ax. This is important because each of them has very unique experiences and responses to the war. A Marco book is usually wildly different from a Cassie book.

The movie should make sure to highlight these unique experiences. While they will undoubtedly change some details about the characters, these are the most important aspects to keep.

Most of the above topics came off as pretty dark and depressing, but the series is actually a ton of fun! The TV series may have gone too far into the campy side of things, but there is definitely an appropriate degree of campiness the movie should strive for.

Ax doesn’t understand normal human clothes and goes wild for Cinnabon, Rachel is called Xena Warrior Princess, and Marco provides a constant running commentary of mood-lightening bad jokes. They also aren’t afraid to admit the sometimes ridiculous situations morphing can get them into. After a vicious, bloody battle that dives into the futility of their fight, we sometimes need to see a hawk face off against a kid with a BB gun and his pet cat. 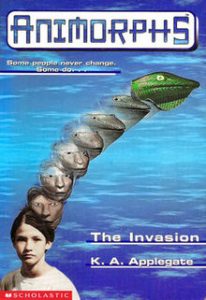 Through the series, the kids are 13-16 years old. They deal with normal things like schoolwork, crushes, and getting grounded by their parents. Included these elements serves two purposes.

First, every movie needs a little romance and teenage angst. Marco morphing into a mouse to spy on a girl that didn’t invite him to her pool party? Tobias morphing human for two hours to take Rachel to the school dance? Pure gold.

Second, it highlights just how much they’re losing connection to their normal lives (Ugh, more of this war is hell stuff, I know). Including a few scenes after a major battle where the team almost died to show that one of them got grounded for missing curfew and another failed a test they never studied for can be great reminders.

We’ve waited a couple of decades for this adaptation, so here’s hoping they find the right tone and approach to doing this series justice. Hopefully, including these seven things will be a good start. What else should the Animorphs movie include? Let me know in the comments or on Twitter @UndertheCapes!

Tim Ludy is an active podcaster, cosplayer and D&D player from Massachusetts. He is the host of The Entreprenerd Podcast which interviews the podcasters, cosplayers, bloggers and creators behind the community’s best geek brands.

With the launch of Disney+, what was once freely available has now been placed behind an obnoxious paywall. …

Netflix has recently announced the additions they’re making to their streaming service for the month of April 2017. …